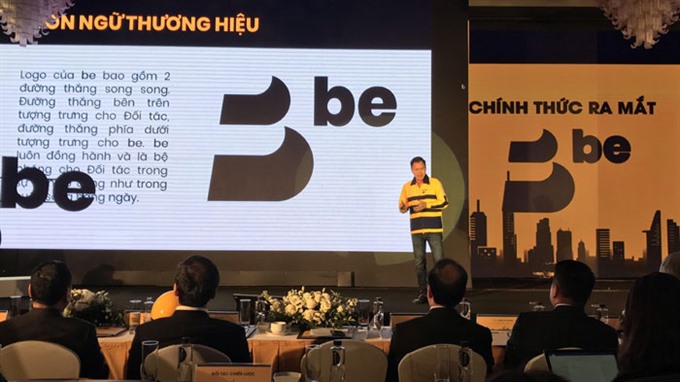 Ride-hailing application Be was introduced at a ceremony on Thursday morning. – Photo kinhtedothi.vn

HÀ NỘI — Be – a new player in Việt Nam’s ride hailing market that made its debut on Thurday morning – aims to have 6.6 million downloads and 105 million rides in the first year of operation.

Run by Vietnamese start-up BeGroup, which was founded by former technology director of VNG Corporation Trần Thanh Hải, Be will go operational next Monday in HCM City with its first two major services: beBike for motorbike rides and beCar for car rides.

BeGroup said it would also develop delivery services next year and would offer a customer loyalty programme and an e-wallet on the Be platform.

Be’s expansion plan will start in February next year when it hopes to receive approval from the State management agencies. In 2019, Be plans to operate in 15 provinces and cities and expand operation to all 63 provinces and their major cities by 2020.

BeGroup hopes the platform will attract around 10 million regular passengers in the next three years.

Be is registered to operate as a transportation company, a major difference of Be from other ride hailing platforms such as Grab – the most popular such service in the country after acquiring Uber’s operations in Việt Nam. Other players include FastGo, Go-Viet, Vato, Aber and Now, which were all competing to expand their market shares.

There is controversy over whether ride hailing firms are transportation companies or simply platforms connecting drivers and passengers. The ambiguity has caused difficulties in managing the sector. — VNS