Even as several startups in the region aggregate a vast array of services in pursuit of a ‘super app’ strategy, Vietnam’s beGroup is walking a different path.

Launched in 2018 in the ride-hailing space, beGroup has expanded into delivery, online groceries and financial services. However, it has stayed away from several areas that are considered essential by those in the ‘super-app’ space – notably food delivery and e-wallets.

Nguyen Hoang Phuong, CEO of beGroup is clear that these businesses will cannibalise the firm’s sustainable growth goal.  She said, “Our strategy from day one was not necessarily to gain every slice of market share at any cost. Instead, we want to build a sustainable business, creating the greater good for Vietnamese consumers as a local company.”

This more measured approach has already started to yield results. beGroup has hit its break-even point this year, making it the first ride-hailing app in Vietnam as well as the region to reach this milestone. It is set to attain profitability in 2021.

From ride-hailing to mobility solutions

Vietnam’s ride-hailing and taxi segment is estimated to be worth $2 billion this year and is projected to grow to $4.3 billion by 2024, according to Statista.com. The average revenue per user is pegged at $106.9 in 2020 and could double within the next 4 years. beGroup’s app has been downloaded on to over 8 million mobile devices. Over 100,000 drivers deliver about 350,000 rides every day. Since its official debut, beGroup has completed over 80 million beBike and beCar rides across 10 cities and provinces of Vietnam.

Even as ride-hailing remains beGroup’s predominant source of revenue, Phuong believes there is ample growth opportunity within the larger mobility sector in Vietnam. She said, “We have not fully exploited the market that has been growing at 38 per cent, despite the presence of many other applications, for the past 6 years.”. 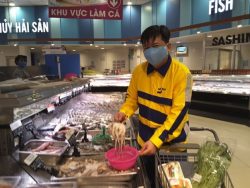 Leveraging its driver network, the company launched delivery services in 2019. The COVID-19 pandemic has accelerated its entry into groceries, with be Di Cho (beShopping). Since its launch, beShopping has been growing 200 per cent to 300 per cent every month.

The firm has avoided food delivery and cashless payments, areas that Phuong believe are crowded and have fiercer competition when compared to ride-hailing. Even within the ride-hailing business, there is a greater emphasis at the beGroup on partnerships to drive growth, making it an open platform.

Among its partners are local taxi firms, as well as Vexere for bus ticketing. In financial services, apart from its strategic partner VP Bank, the company has worked with e-wallet MoMo and commercial merchants for its payment and loyalty programs.

This model expands beGroup’s profitability horizon, without burning through its war chest.

Phuong explained that beGroup has invested “reasonable resources” to acquire a 30 per cent market share in the ride-hailing business. The company was the second largest player in Vietnam by September 2019, according to a report from ABI Research.

But as Vietnam moves into the digital era, beGroup has set its sights on sustainable development. While many tech businesses are still making hefty losses, sustainability is the main driver for beGroup to achieve profitability. More than a fight for market share, the focus is on organic growth and retention, through customer- and partner-centric operations.

At the same time, the firm is not taking its competitors lightly. Phuong said, “We will invest wisely. We have demonstrated our internal strength and ability to grow with our own line of products, services and plans for future expansion. Once a monopoly takes the throne and manipulates the market, driver partners and customers will be in a disadvantageous situation.”

Vietnamese are more price-sensitive than their Asian peers, according to a recent survey by research firm Nielsen. The survey revealed that a price increase by 1 per cent, results in a 2 per cent decline in revenue.

However, there is a shift in this behaviour. A report from Deloitte released earlier this year highlighted that Vietnamese consumers are becoming less concerned about price tags.  Quality and convenience are emerging as important drivers of purchase behavior. And so, beGroup’s mandate is understanding local needs and consumption patterns rather than waging a price war.

The company has taken the lead in shifting stereotypes about homegrown brands, in order to tap the tremendous potential ahead. Phuong said, “In the past, Vietnamese consumers would prefer foreign brands. But now, thanks to beGroup’s efforts, we have demonstrated our competitiveness and attracted customers from foreign competitors.” The approach was vindicated by beGroup’s customers. Once social distancing was eased in Vietnam, Phuong said, “Many of our customers immediately returned. This is not too different from our expectation. beGroup has always aimed at a certain segment of customers, since the time we first started.”

It is not just customers who are drawn to beGroup’s differentiated approach. It has found resonance with driver partners as well. Nguy Nhu Vinh Thinh, a beCar driver since August 2019 said, “As Uber withdrew from the market, and after some transition to Grab, I chose to join be, as I found it very convenient being their partner. be is very responsive to our concerns and serious about supporting us. People often think a driver should take risks doing his job, but in fact, we seek assurance too.” He is pleased with the customer base of beGroup. He said, “They are primarily white-collar workers who are very polite and tech-savvy.

He has finished over 5,000 rides with beGroup within just one year, and is very positive about the future: “As domestic activities have re-opened, I feel assured about driving with be for the next 5,000 rides and more.”